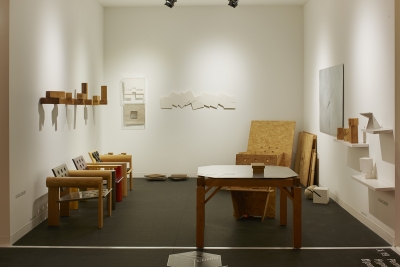 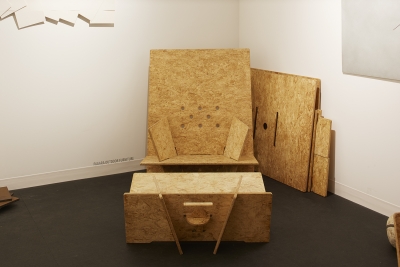 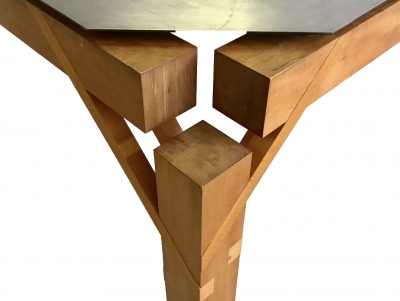 Karla Osorio Gallery presents work by the historical Minimalist artist Roland Gebhardt, who was born in Suriname in 1939 and has lived in New York since the 1960s. In the 1970s and ’80s he was represented by Carlton Gallery and exhibited with Minimalist artists such as Donald Judd, Carl Andre, Richard Serra, and Brice Marden. Devoting his career mainly to design, Gebhardt participated in large-scale and urban projects in the United States, Europe, and Japan, and created a line of sculptural furniture in the 1990s and 2000s. Meanwhile, he never abandoned his artistic practice, producing works that have not been shown for almost thirty years.

His study of the void has inspired him since the very beginning—the methodical, obsessive repetition of objects and themes and a predilection for volumes and their enigmatic nature are markers of his work. The artist “interferes,” using cuts and incisions to rigid or organic materials, such as boulders, wood, steel, paper, aluminum, fruits, vegetables, and books. Gebhardt rewrites the history of the material, denatures it, creating new geometric lines.

The design vocabulary and materials used in his furniture are familiar, fostering a sense of reassurance and comfort, yet the sculptural forms of the furniture are unique and innovative. The dimensional design is minimal, simple, and unadorned. The design principles, joinery, and assembly are respectful of the materials used. Each piece is faithful to his design principal and connected to his artistic path.

Karla Osorio Gallery was established in 2014 in Brasília after decades of commitment from its namesake director to collecting and supporting contemporary art in Brazil and abroad. Part of Karla Osorio Gallery’s mission is supporting new collectors and including new artists in the international art scene. The gallery holds exhibition programs and is active in art fairs in South America, the United States, Europe, and Asia. It also promotes initiatives to form new audiences, including offering an artist residency program.