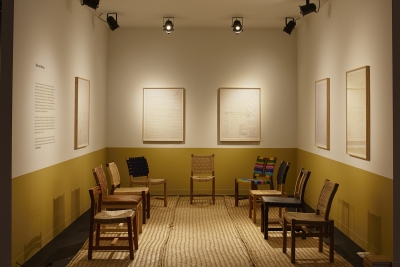 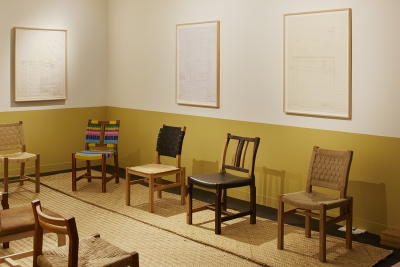 This selection of chairs by architect and designer Oscar Hagerman highlights the importance of his contributions to design meant for everyday, commonplace use. Each chair represents a combination of his own creative reflection and his collaboration with various artisans throughout Mexico. The resulting product is a culmination of Hagerman’s creative process, exemplifi ed through the humble form of a chair.

The basis of these chairs is the Arrullo chair (1969). Based on a popular Mexican design, Hagerman’s Arrullo chair received significant acclaim and was subsequently reintroduced and reproduced in furniture workshops throughout Mexico. Through the process of widespread reproduction, the Arrullo chair essentially—and intentionally—lost its status as a designer chair. The same design could be found in markets and beside highways—it became a mainstay of Mexican homes.

The ergonomics that were used in these designs correspond to more than fi fty years of studies by Hagerman and other designers. Hagerman continues his work in artisan workshops in several rural regions of Mexico. Through his work with isolated communities he has learned local construction techniques that respond and react to the climatic and cultural needs of each population. Hagerman participates actively with these communities to conserve their ancestral design knowledge.

kurimanzutto was founded in 1999 in Mexico City by José Kuri, Monica Manzutto, and a group of thirteen artists. Initially conceived as a nomadic gallery without borders, kurimanzutto collaborated with each artist to find an ideal location for a site-specific project or situation. In May 2018 the gallery announced the opening of kurimanzutto new york, a new project space
at 22 East 65th Street.